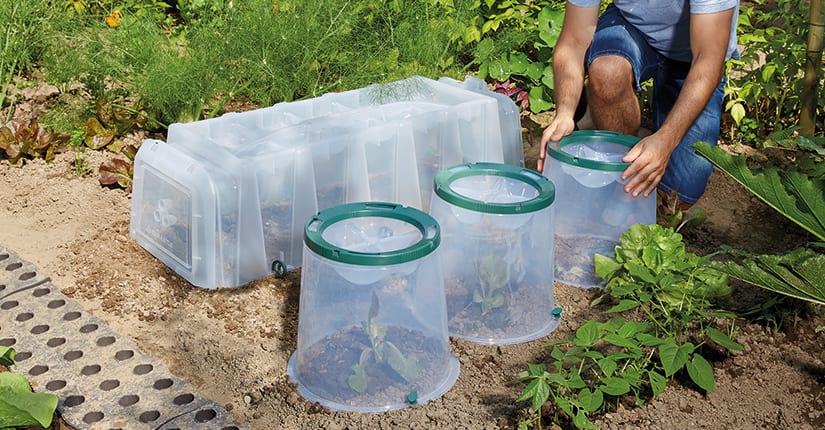 It’s important to get as much as you can out of the cropping season and using a growing tunnel or cloche will play a key role in helping you do just that. By pre-warming the soil during the spring, the germination of crops can occur earlier, which adds anywhere between 3-4 weeks to either side of the season. For example, a cloche has the ability to raise local soil temperatures anywhere up to 10°C, increasing the germination of direct-sown crops by as much as two weeks in some cases. As a result, the air temperature will increase which means less heat is lost overnight, which should produce an earlier harvest.

To enjoy the very best results, position a growing tunnel or cloche in place around one week before the transplanting or sewing of crops to soil. This will enable temperatures below ground level to rise in time, with lower soil levels retaining some of the warmth, while temperatures closer to the surface will fluctuate a little more.

Pests and disease are the bane of any gardener’s life, so it’s always a good idea to find ways to minimise the potential damage they can cause. Growing tunnels and cloches prove to be extremely effective in this regard, creating a physical barrier to protect crops. Cloches offer better levels of protection against bird damage, although are less effective than insect or fleece proof mesh when it comes to keeping out pests.

Air-borne diseases such as tomato blight and onion downy mildew can be reduced through use of well-ventilated cloches as crops will be less affected by rainwater. Keeping crop leaves dry also means foliar diseases (which rely on good amounts of moisture) will struggle to infect foliage. A key point to remember here is to also reduce humidity with use of good ventilation, which can be done by lifting up the side of the cloche, or by opening the air vents.

The idea of creating a physical barrier to fend off pests and disease also extends into weather protection. You can increase both the leaf surface area and growth rates by shielding crops from the wind, while at the same time promoting a ‘softer’ growth. This is particularly helpful for crops such as cabbage, salads and spinach which should all benefit as a result. If this type of crops are exposed they will need to be hardened off as they tend to wilt quickly when exposed to sunshine or strong wind unexpectedly. This should be done in two stages: first by increasing ventilation for about a week, usually for a few hours a day, before exposing the crops fully after that.

Cloches are also great at fending off hail downpours that can cause quite a bit of damage to younger plants, while also deflecting heavier rainfall that can prove detrimental to seedbeds, soil structure, young plants, with splashed soil also potentially contaminating produce.

Carrots and chicory, crops traditionally sewn in the autumn, can be protected from rain and frost by cloches during the season. Late-ripening crops such as chillies and bush tomatoes will also benefit as the temperatures will be buffered for longer, which reduces the sharper edges of early frosts during this time. If you place black polythene over a cloche this can be used to blanch chicory and endive, the lack of exposure to light for a number of weeks will make them less bitter and more succulent.

You can also use straw or other forms of insulation material to stuff into black plastic clad cloches, which can then be placed over root crops. This is particularly helpful when you enter into the much colder winter months, as the crops will remain much more accessible.

The money invested into your garden soon adds up and if you need to keep a close eye on your expenditure than a growing tunnel will prove to be a great purchase. This is especially true when compared to spending money on a greenhouse, which should allow you to buy at a growing tunnel that is at least 3-4 times the size for around the same price. In terms of size, you will also have more options available, making it easier to find the right dimensions to suit your garden area. Growing tunnels and cloches, in particular, are much easier to transport and move to a new location if needed, giving you greater flexibility.

Callum has been with us for over 6 years and looks after all of our main marketing channels for Garantia UK and Graf UK. You will often see his face popping up on our Instagram and his product knowledge is second to none. When he isn’t at work, you will find Callum on the pitch, playing football for Charlton & District.