Growing fruit and vegetables in February 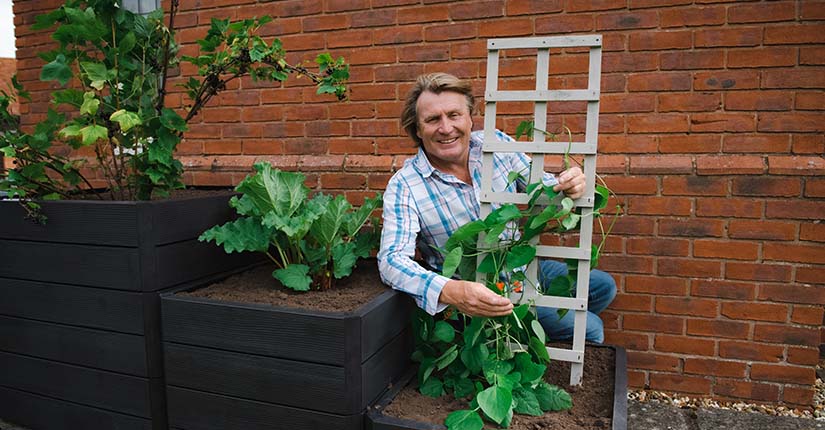 As we notice the temperatures start to increase slightly and days begin to get that little bit longer, it’s a sure sign that spring is on the way. The garden begins to come to life again, with early blooms bursting, marking a new season full of possibilities in the garden.

Prepare the seedbeds for sowing by digging in peat-free organic matter to boost the nutrients in the soil. Then, increase the temperature of the soil before sowing by covering it with clear polythene or horticultural fleece. If your garden soil is acidic, raking in lime will reduce the acidity and increase the pH level. One of the benefits of growing in raised beds is that if the soil in your garden isn’t the perfect fit for the crops you want to grow, you can easily add the soil type needed. For example, blueberries need a sunny spot and acidic soil to grow, so peat-free ericaceous compost can be used in an ERGO Raised Bed to suit them. Watering them with rainwater and mulching with bark chippings or pine tree needles is an ideal way of keeping up the acidity of the soil.

Another thing to prepare is the crop rotation system for the veg plot. Consider which crops were planted where and follow the guidance to decrease the likelihood of diseases spreading. The standard rotation is because legumes absorb nitrogen from the air and store it in their roots, ready for the brassicas to use it to grow leafy growth the following year. Brassicas have large roots which break up the soil perfectly for potatoes to be planted in the spot next, followed by legumes again, for the cycle to repeat.

Get growing season off to a flying start by sowing seeds under cover to keep them protected. Carrots and parsnips can be sown outdoors in their final position, while lettuce and other salad crops can be sown from now up until autumn for harvests through the year. Kale is a worthwhile addition to the veg garden as it’s a crop full of goodness, packed with nutrients such as vitamin K, making it one of the healthiest plant foods. Sow kale seeds in a spot with moist but well-drained soil with full sun or partial shade and place under the Sunny growing tunnel until spring when the weather warms up. The tunnels allow effective aeration, and the water recesses allow moisture to drip through to keep the crops well-watered.

Sowing early in the year and using protection like polytunnels, cold frames, fleeces and greenhouses is a great way of extending the growing season to make the most of the space.

Potatoes need a deep container to grow in, making ERGO Quadro L raised bed system perfect for the job as they can be customised to suit the height needed.

Preparing potato tubers before planting is ideal for earlies and maincrops. Doing this involves ‘chitting’ the seed potatoes, which means allowing them to start growing shoots. Get hold of an egg box or tray and place the potatoes in the container, with the side with the most ‘eyes’ facing upwards. Position the box in a light space and wait until the shoots have sprouted to around 3cm in length. Leave the four longest and healthiest looking shoots on, and remove the rest.

The type of potato will determine the best time to plant them. First earlies should be planted in late March, with second earlies following in mid-April and maincrops in mid to late April.

When sowing seeds, there may be some competition between who gets to the crops first, as birds may have an eye on the veg garden too. Whilst searching for worms or digging up seeds before they sprout, birds can cause damage to your crops. Netting and fruit cages are a means or protecting vulnerable plants. Choosing a fine mesh netting means bees can still get through to pollinate but small creatures are less likely to be trapped. To reduce the chance even more, keep the netting taut and check regularly for holes.

Offer birds sustenance by placing bird feeders in other spots in the garden as well as water for drinking and bathing. Seed mixes will keep dunnocks, finches, and house sparrows happy, whilst sunflower seeds will keep robins, tits and blackbirds satisfied.

Taking a step closer to spring means there is plenty to get a head start with to ensure you have a long and successful growing season. From warming the soil for fruit and veg seeds to keeping an eye on wildlife that may try to beat you to your crops.

David Domoney has over 40 years’ experience in horticulture and 20 of these have been spent on national television. Having become a household name, not only is he a Fellow of the Chartered Institute of Horticulture, he’s a decorated garden designer and the mastermind behind UK-wide gardening competitions, such as Cultivation Street and Young Gardeners of the Year.